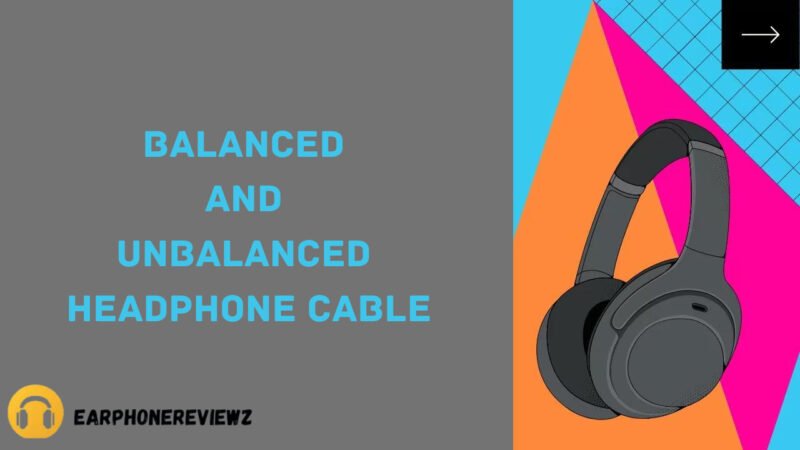 The balanced and unbalanced headphone cable can greatly affect the user experience when a person wants to listen to some video or songs using his headphones.

There are several myths about audio transmissions, with some suggesting that in-ear headphones can actually detect variations. These variations can sometimes cause mishaps, which is why users should know the difference.

You are in luck because we will explain what exactly balanced and unbalanced headphone cable are and how they function.

What Are Balanced Headphone Cables?

A key issue with sound transmission, interference from outside the cable, was addressed with the development of the symmetrical or balanced cable.

Since it would be physically impossible to completely eliminate external interference at its source, the only viable approach was to exclude it by having the signal duplicated on a different wire before it is carried over the cable.

With one addition, a balanced audio cable’s construction resembles that of an unbalanced cable. Balanced connections are used in professional applications to transmit audio signals across the cable.

These signals are frequently much longer than those used for domestic audio and are, therefore, more likely to be subjected to several possible sources of interference.

A minimum of three conductors are used in balanced connections, including one for ground, a matched pair of twisted wires (one for the “hot” signal and one for the “cold” signal), and a connector.

These are used for incoming audio signals, while it also features a ground wire. The polarity of the two signals is inverted, so when they move up the cable, they cancel one another out.

However, the polarity of the cold signal is reversed at the other end of the line, putting the hot and cold signals into phase and synchronization. Due to the fact that balanced signals deliver two in-phase signals, they are also louder (by about 6 to 10 dB) than unbalanced signals.

What Are Unbalanced Headphone Cables?

Single-ended (SE), often known as unbalanced connections, is the most common kind of analog electrical connection, such as the ones between your turntable and amplifier or the wire you use to connect your phone to a speaker.

This indicates that each audio signal is carried by a single conductor, together with a shield that serves as a reference to the ground and a current return to complete the circuit.

The RCA plug for home audio serves as the standard plug for this kind of connection. In semi-professional applications, particularly for electric musical instruments, you may also see the more durable 1/4-inch tip-sleeve (TS) jacks or the 3.5mm tip-ring-sleeve (TRS) jack.

They transmit two unbalanced signals in stereo applications and are frequently referred to as an “aux” connection.

Naturally, the interference is picked up by both positive and negative signals. The two wires’ sum is now equal to zero because their polarities are the opposite of one another. As a result, we couldn’t hear anything if we tried to listen to the audio inside the cable.

Positive and negative signals would completely cancel one another out. We would only hear the interference picked up along the path, whether it be the constant static hum or the audible bump in the line, because this interference didn’t cause a polarity reversal on any of the lines.

Which Cable Should You Use Between Balanced and Unbalanced?

Since the word “unbalanced” has a bad reputation, many users would assume that unbalanced cables should be avoided at all costs. They can distort your audio and are shorter, which limits what you can accomplish with them.

Actually, at distances under 10 feet, distortion isn’t a big issue. Your connection is probably not long enough for someone recording audio from a studio or recording booth to experience distortion.

In reality, at close ranges, unbalanced connections can send signals that are significantly stronger than balanced wires. The offer is even more attractive because unbalanced cables frequently cost far less than their balanced versions.

Due to their more intricate design and requirement for supporting equipment that can make use of the balance function, balanced cables are more expensive.

Because of their clarity and simple design, unbalanced connections that stretch up to 10 feet are popular in recording studios and among lower-budget broadcasters.

Although in certain quarters, balanced output and cable configurations may be thought of as the industry standard, the choice ultimately comes down to your particular needs and the resources that you have.

When Using Unbalanced Cables, How Can Noise Be Minimized?

Careful cable positioning is the greatest way to lessen unbalanced cable noise. Power and audio cables should only cross one time, perpendicularly, rather than running parallel. If parallel wiring is unavoidable, give the audio and power wires as much room as you can.

If you wish to attach a microphone from center stage, you’ll probably need a long connection, be close to other devices, while the presenter speaks.

A guitar is played loud enough during a rock performance to drown out distortion, even while utilizing a longer, unbalanced wire. You can enhance the audio quality of your recordings by knowing the difference between balanced and unbalanced cables.

Also check: Which One Is Best DTS Headphone X Vs Dolby Headphone

This discussion explains how balanced and unbalanced headphone cables differ from each other. Balanced transmission is the method of choice for getting the most error-free signal routing feasible.

In the realm of microphones, it is the only transmission that is conceivable; however, in other fields, it is becoming favored, provided that matching equipment is available (XLR or TRS).

Using balanced cables is practically required when dealing with really lengthy cables (we’re talking tens of meters, for instance). For further details, you can see the FAQ.

Unquestionably, balanced connections will transmit a crisper, stronger signal with significantly less interference. To avoid as much interference as humanly possible in a studio setup, you would want all of your audio wires to be balanced from top to bottom.

Interference is a sin that must be avoided at all costs in the realm of professional audio. Naturally, you should check to see if all of your equipment supports balanced connections first; otherwise, you’ll only waste your time.

Many people are curious about whether balanced output hardware actually makes a difference and whether it is feasible to tell the difference between a unbalanced and balanced signal.

In actuality, it does. The majority of listeners will notice a significant difference between a signal sent over a balanced audio connection and one sent over an unbalanced one.

However, a number of other elements will also play a role in determining the difference between the audio you hear through balanced connections and unbalanced cords.

Are Balanced Headphones a Better Choice?

Just be aware that a balanced signal will be able to deliver far more power with a much faster response time.

Why Should Balanced Cables Be Used?

Professionals route the signals through balanced cables in an effort to reduce the noise generated by electromagnetic (EM) and radio frequency (RF) sources such as fluorescent lights, motors, AC mains, and cell phones.

The conductors of a cable can become noisy for any of these reasons. The goal is to retain clear, buzz- and hum-free audio while reducing the impact of EMI on the desired audio stream.