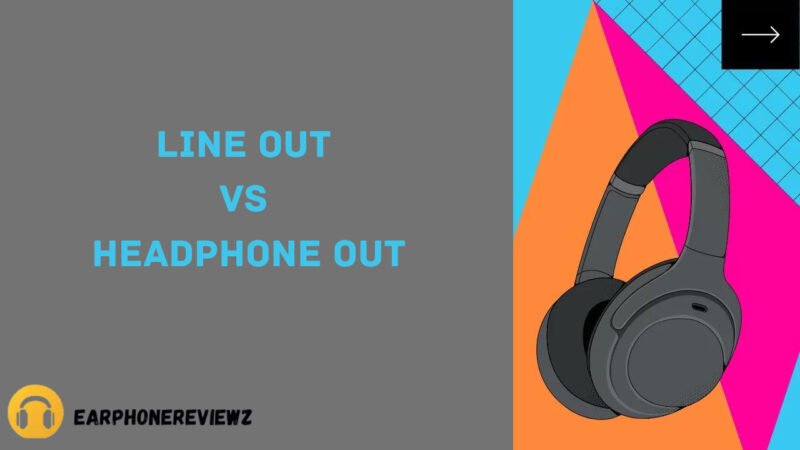 The two identical audio connections, known as line outputs and headphone outputs, are commonly confused with one another. There can be a great debate about this to express which one has what type of function in the digital world.

Line Out And Headphone Out:

A line output offers an audio signal that can be further amplified by an external amplifier, as opposed to a headphone out, which amplifies the signal before delivering it.

An audio connection port for a line-level out signal is the line out. Headphone outs are used to drive headphones, whereas line outs are utilized to connect to external amplifiers.

What Does Line Out Do:

Your computer’s sound card has a line output called sound out, where you can connect speakers and other audio signal outputs. It is connected to your computer through a line output, allowing it to transmit the audio stream it produces to the devices of your choice.

This allows sending a line-level signal from one device to another for further processing. These line-level audio signals are produced by a line output. Any audio output that transmits line-level signals is a line out. Additionally, they are designed to drive loads with high input impedance.

Benefits of Line Out:

Drawbacks of Line Out:

What Does Headphone Out Do:

Similar to line-outs, a headphone output is where your computer’s audio signal is routed to your headphones. A set of headphones with sufficient amplification can be powered easily through this output. This amplification is built-in to be able to drive a headphone.

Benefits of Headphone Out:

Drawbacks of Headphone Out:

Differences Between Line Out Vs Headphone Out:

Line outs and headphone outs are sometimes confused with one another because of how similar they are. These are audio ports that allow line-level audio signals to be sent back and forth between two audio devices.

These line-level signals are amplified and sent to the headphone out so that headphones can be operated. But there is also a lot more to it. We will get them discussed in detail for comparison in the section below.

Lineouts are not designed to drive headphones and do not contain built-in amplifiers. External amplifiers are intended to be connected to lineouts. When you use a gadget’s line out, it bypasses the amp when the device has an amp built in.

The headphone out has amps built right into them. Because of this, headphone outputs may produce greater power with less distortion. However, the built-in amplifier of these same devices serves to boost the signal intensity being transferred when you utilize the headphone jack.

Even some headphone outputs are built with more powerful amplifiers and have the capacity to produce a higher voltage.

You know from the debate so far that line-outs don’t have amplifiers built into them, but headphone-outs do. Line-level outs typically give highly pure sound because they need amplifiers.

In contrast to low-quality amps, certain high-quality amplifiers will provide clear sound, and even if they make a tiny amount of noise, it might be difficult to hear it. The amount of distortion can be considerable or low depending on the caliber of the amplifier being utilized in your headphone out.

The line-out signals have a source resistance of 100 and higher ohms. They have a high input impedance. This helps them to carry signal loads. Line outs have a far stronger signal than headphones outs do.

Additionally, especially when utilized with high-impedance loads, they are highly optimized for low noise and low distortion. A headphone output, on the other hand, is made expressly for lower impedance loads and can provide more power to them.

The headphone outs are designed to drive normal headphone impedances, which fall between 16 to 300 ohms. They are additionally sufficiently tailored to produce low noise and acceptable distortion with low impedance loads.

The headphones receive enhanced line-level signals. Thus, audio signals received through a headphone connector will experience many stages of amplification, perhaps causing distortion or noise addition to the stream.

Line-level output signals, on the other hand, are exceedingly clear. As a result, headphone outputs are frequently muted as opposed to the clear sound from the line out. This noise, however, could be challenging to hear depending on how loud the headphone out’s built-in amp is.

On the device they are attached to, line outs have a defined volume. On the other hand, a headphone output’s volume can be adjusted. Headphones cannot be driven by lineouts since they lack built-in amplifiers.

On the other hand, an amplifier-equipped headphone out was created. Headphone outputs may therefore provide more power with less distortion.

Also check: Which are the better headphones Beats Vs JBL Headphones

This guide covers line-out Vs headphone out comparison to explain the working principle and common differences between both the sound output ports. To remove the confusion, we have also shared the detailed comparison for your ease.

Headphone Line Out: What Does It Mean?

It is designed to transfer audio signals through the headphone port if it has a headphone line out. There are advantages to using this port over other types of ports, but there are also disadvantages that you should be aware of.

Is The Audio Out The Same As The Headphone Jack?

No, it’s called the headphone out port instead of the headphone jack. It’s employed to transmit audio signals to headphones. The audio-out feature, on the other hand, is utilized to play music from your devices through external speakers or amplifiers.